Since 1895, the media has alternated between global cooling and warming scares during four separate and sometimes overlapping time periods. From 1895 until the 1930’s the media peddled a coming ice age. From the late 1920’s until the 1960’s they warned of global warming. From the 1950’s until the 1970’s they warned us again of a coming ice age. This makes modern global warming the fourth estate’s fourth attempt to promote opposing climate change fears during the last 100 years. 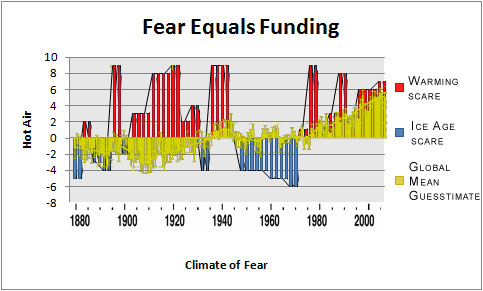 This chart shows the alternating claims of coming ice age and global warming, overlaid with NOAA's own current claims of climate change. Note that they not only turn every minor change into a major disaster, but sometimes they actually get it completely wrong.

Posted by kazvorpal on August 12, 2009 in Politics