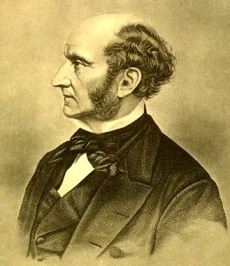 "The only purpose for which power can be rightfully exercised over any member of a civilized community, against his will, is to prevent harm to others. His own good, either physical or moral, is not a sufficient warrant."

Both in England and on the Continent a graduated property tax (l’impôt progressif [progressive tax]) has been advocated, on the avowed ground that the state should use the instrument of taxation as a means of mitigating the inequalities of wealth.

I am as desirous as any one that means should be taken to diminish those inequalities, but not so as to relieve the prodigal at the expense of the prudent.

To tax the larger incomes at a higher percentage than the smaller is to lay a tax on industry and economy; to impose a penalty on people for having worked harder and saved more than their neighbours.

It is not the fortunes which are earned, but those which are unearned, that it is for the public good to place under limitation.

Posted by kazvorpal on February 1, 2012 in economic, Philosophy, Politics