Your Right to Not Support Evil <— Thomas Jefferson 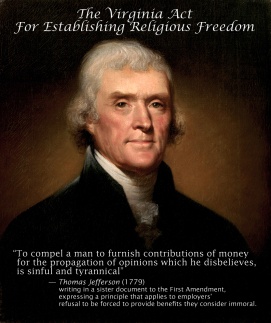 To compel a man to furnish contributions of money for the propagation of opinions which he disbelieves, is sinful and tyrannical

— Thomas Jefferson, The Virginia Act for Establishing Religious Freedom (1779)
…writing in the First Amendment’s sister document, expressing a principle that applies to the modern refusal to provide employees with services they consider immoral

Posted by kazvorpal on January 3, 2013 in Philosophy, Politics, Religion

“I have sworn upon the altar of god, eternal hostility against every form of tyranny over the mind of man.”

If there be any among us who would wish to dissolve this Union or to change its republican form, let them stand undisturbed as monuments of the safety with which error of opinion may be tolerated where reason is left free to combat it.

Posted by kazvorpal on July 9, 2012 in Freedom of Expression, Politics

Politicians SHOULD Be Afraid <- Barnhill 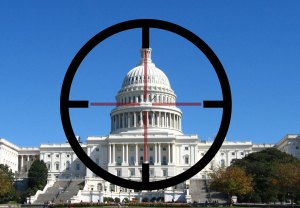 There is a recent push to censor political speech like the above picture, ban guns, et cetera, to "protect politicians"...but crazed maniacs aside, their fear is healthy for liberty

Where the people fear the government you have tyranny.

Where the government fears the people you have liberty.

JEFFERSON NEVER SAID THIS. That’s right. We’re eventually going to come out with a list of false attributions we’ve discovered while trying to source them for our own use.

Posted by kazvorpal on January 20, 2011 in Politics, Quotations 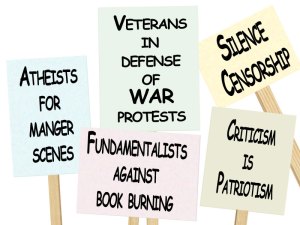 Defend your opponents' rights, or lose your own

An avidity to punish is always dangerous to liberty. It leads men to stretch, to misinterpret, and to misapply even the best of laws. He that would make his own liberty secure must guard even his enemy from oppression; for if he violates this duty he establishes a precedent that will reach to himself.

Posted by kazvorpal on January 4, 2011 in Philosophy, Politics, society

Words are SUPPOSED to Hurt 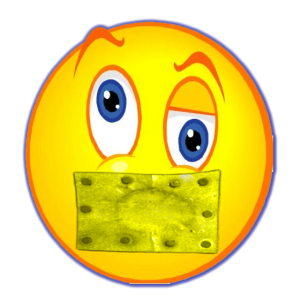 Words are supposed to hurt. That’s considered a legitimate way of fighting things out.

And what did it replace in the historical scene? It replaced actual violence.

Words are supposed to be free so we CAN actually fight things out, in the battleplace of ideas, so we don’t end up fighting them out in civil wars.

If we try to legitimately ban anything can hurt someone’s feelings, everyone is reduced to silence.﻿

Posted by kazvorpal on July 26, 2010 in Philosophy, Politics

Liberty to Know and Argue by Conscience

Areopagitica is regarded as one of the most eloquent defences of press freedom ever written.

Give me the liberty to know, to utter, and to argue freely according to conscience, above all liberties.

– John Milton, Areopagitica: A speech of Mr. John Milton for the liberty of unlicensed printing to the Parliament of England, 1644