“My political opinions lean more and more to Anarchy (philosophically understood, meaning abolition of control not whiskered men with bombs) – or to ‘unconstitutional’ Monarchy. “I would arrest anybody who uses the word State (in any sense other than the inanimate realm of England and its inhabitants, a thing that has neither power, rights nor mind); and after a chance of recantation, execute them if they remained obstinate! If we could get back to personal names, it would do a lot of good. “Government is an abstract noun meaning the art and process of governing and it should be an offence to write it with a capital G or so as to refer to people. If people were in the habit of referring to ‘King George’s council, Winston and his gang’, it would go a long way to clearing thought, and reducing the frightful landslide into Theyocracy. “Anyway the proper study of Man is anything but Man; and the most improper job of any man, even saints (who at any rate were at least unwilling to take it on), is bossing other men. Not one in a million is fit for it, and least of all those who seek the opportunity. And at least it is done only to a small group of men who know who their master is.” — From a letter to Christopher Tolkien [from his father J.R.R. Tolkien] 29 November 1943 https://peacerequiresanarchy.wordpress.com/2012/09/21/the-letters-of-jrr-tolkien/

Posted by kazvorpal on January 8, 2019 in Philosophy, Politics, society

Another’s Happiness, Equal to Your Own <— Heinlein 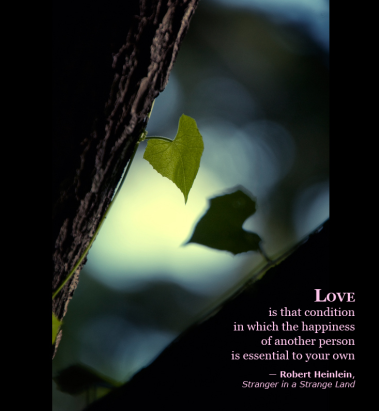 In the later novel, The Cat Who Walks Through Walls, a character refers to the earlier book’s comment: “Dr. Harshaw says that ‘the word ‘love’ designates a subjective condition in which the welfare and happiness of another person are essential to one’s own happiness.”

Love is the condition in which the happiness of another person is essential to your own.

Posted by kazvorpal on August 27, 2012 in People, Philosophy, society

“We may add that frequent punishments are always a sign of weakness or remissness on the part of the government.”

In a well-governed state, there are few punishments, not because there are many pardons, but because criminals are rare; it is when a state is in decay that the multitudes of crimes is a guarantee of impunity.

"I would like to think that if we had a freer society, it would take care of blacks and whites and everybody equally. But if we had equal justice under the law, it would be a big improvement"

Libertarians are incapable of being racists, because racism is a collectivist idea; you see people as groups. A civil libertarian like myself sees everyone as an individual.“It’s not the color of the skin that’s important” as Martin Luther King said, “it’s the character of the individual“.

You know what is really interesting, though, and might be behind [the racism claims]. Because I, as a Republican candidate, am getting the most black votes and black supporters, and now that has to be undermined.

Posted by kazvorpal on December 28, 2011 in Politics, society 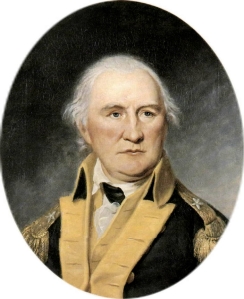 Brigadier General Daniel Morgan, inspiration for the move The Patriot, was the best tactician of the Revolution...and opposed to preemptive war

As to war, I am and always was a great enemy, at the same time a warrior the greater part of my life, and were I young again, should still be a warrior while ever this country should be invaded and I lived — a Defensive war I think a righteous war to Defend my life & property & that of my family, in my own opinion, is right & justifiable in the sight of God.

Posted by kazvorpal on April 22, 2011 in Foreign Policy, Politics, society

You never let a serious crisis go to waste. And what I mean by that it’s an opportunity to do things you think you could not do before.

Posted by kazvorpal on January 18, 2011 in Philosophy, Politics, society

The Right to Offend <- Orwell

If liberty means anything at all it means the right to tell people what they do not want to hear.

The common people still vaguely subscribe to that doctrine and act on it. In our country — it is not the same in all countries: it was not so in republican France, and it is not so in the USA today — it is the liberals who fear liberty and the intellectuals who want to do dirt on the intellect

(This was to be the foreword of Animal Farm. It is perfect irony, that the publisher decided to censor it.)

Posted by kazvorpal on January 10, 2011 in Philosophy, Politics, society

Government is not reason, it is not eloquence — it is force!

Like fire, it is a dangerous servant and a fearful master.

Never for a moment should it be left to irresponsible action.

— Cited by Upton Sinclair, in The Cry for Justice (1915), as having been said by George Washington

Posted by kazvorpal on January 7, 2011 in Politics, Quotations, society

Defend your opponents' rights, or lose your own

An avidity to punish is always dangerous to liberty. It leads men to stretch, to misinterpret, and to misapply even the best of laws. He that would make his own liberty secure must guard even his enemy from oppression; for if he violates this duty he establishes a precedent that will reach to himself.

Posted by kazvorpal on January 4, 2011 in Philosophy, Politics, society 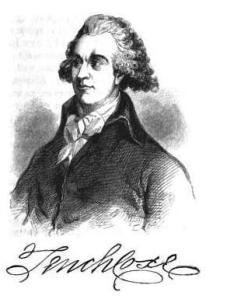 Whereas civil rulers, not having their duty to the people duly before them, may attempt to tyrannize, and as the military forces which must be occasionally raised to defend our country, might pervert their power to the injury of their fellow citizens, the people are confirmed by the article in their right to keep and bear their private arms.

— Tench Coxe, “Remarks on the First Part of the Amendments to the Federal Constitution,” under the pseudonym “A Pennsylvanian” in the Philadelphia Federal Gazette, June 18, 1789.

Posted by kazvorpal on October 13, 2009 in Politics, society

After a shooting spree, they always want to take the guns away from the people who didn’t do it.

I sure as hell wouldn’t want to live in a society where the only people allowed guns are the police and the military.

Posted by kazvorpal on October 10, 2009 in Politics, society

That principle is, that the sole end for which mankind are warranted, individually or collectively in interfering with the liberty of action of any of their number, is self-protection. That the only purpose for which power can be rightfully exercised over any member of a civilized community, against his will, is to prevent harm to others. His own good, either physical or moral, is not a sufficient warrant.

He cannot rightfully be compelled to do or forbear because it will be better for him to do so, because it will make him happier, because, in the opinions of others, to do so would be wise, or even right. These are good reasons for remonstrating with him, or reasoning with him, or persuading him, or entreating him, but not for compelling him, or visiting him with any evil, in case he do otherwise.

Posted by kazvorpal on September 30, 2009 in Politics, society