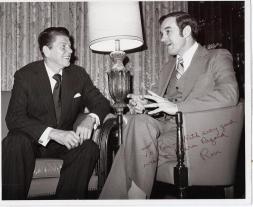 Reagan appointee Ron Paul, sitting with The Gipper, himself

If you analyze it I believe the very heart and soul of conservatism is libertarianism.

The basis of conservatism is a desire for less government interference or less centralized authority or more individual freedom and this is a pretty general description also of what libertarianism is.

Posted by kazvorpal on February 22, 2012 in Liberty, Philosophy, Politics

Freedom vs the Chains of Security <– Ron Paul 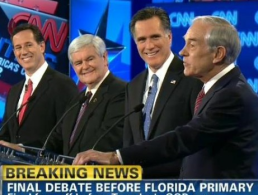 "We need a strong president, strong enough to resist the temptation of taking power the President shouldn’t have."

Freedom is not defined by safety. Freedom is defined by the ability of citizens to live without government interference.

Government cannot create a world without risks, nor would we really wish to live in such a fictional place. Only a totalitarian society would even claim absolute safety as a worthy ideal, because it would require total state control over its citizens’ lives.

Liberty has meaning only if we still believe in it when terrible things happen and a false government security blanket beckons.

Posted by kazvorpal on January 30, 2012 in Philosophy, Politics 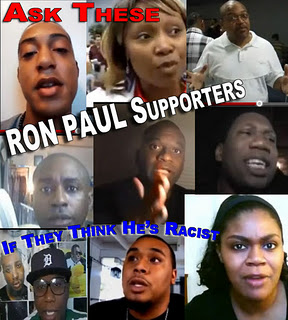 "I would like to think that if we had a freer society, it would take care of blacks and whites and everybody equally. But if we had equal justice under the law, it would be a big improvement"

Libertarians are incapable of being racists, because racism is a collectivist idea; you see people as groups. A civil libertarian like myself sees everyone as an individual.“It’s not the color of the skin that’s important” as Martin Luther King said, “it’s the character of the individual“.

You know what is really interesting, though, and might be behind [the racism claims]. Because I, as a Republican candidate, am getting the most black votes and black supporters, and now that has to be undermined.

Posted by kazvorpal on December 28, 2011 in Politics, society

The Philosophy of Liberty

You Own Your Own Life…

A product of you Life and Liberty is your Property

— Ken Schoolland, The Philosophy of Liberty

Posted by kazvorpal on August 31, 2009 in education, Politics